Brazil has invited tourists from the UAE to discover something new with a trip to explore the South American country’s rich culture and diversity.

As COVID-19 restrictions begin to ease, the nation’s tourism industry is on the rise, leading increasing numbers of people to place Brazil at the top of their list as they eagerly plan their summer trips.

Today, Brazil blooms with diversity, from African and European to East Asian cultures combining with the country’s own colorful culture. Presenting influences of the Amazon and a colonial past to explore, Brazil promises a unique South American experience wherever tourists choose to step foot.

Salvador is the right destination for many tourists who travel through Brazil: the city is a living museum of the history and diversity that Brazil offers. Symbolic of the mixture of creeds and ethnicities, the culture that was formed in Bahia is rich and full of happy and receptive people. Bahian culture is unique, strong in many aspects, and stands out in cuisine, architecture and artistic expression.

The historic centre and Pelourinho, which feature old buildings in the city, are a must-see in Salvador and provide a good place to start your itinerary. There you will be able to learn about the historical vein of the capital and the origin of Brazil, as well as visit churches such as the Church and Convent of São Francisco. The Lacerda Lift, which connects the higher and lower parts of the city, and the Modelo Market — traditional for the sale of local souvenirs, are also nearby tours worth booking. 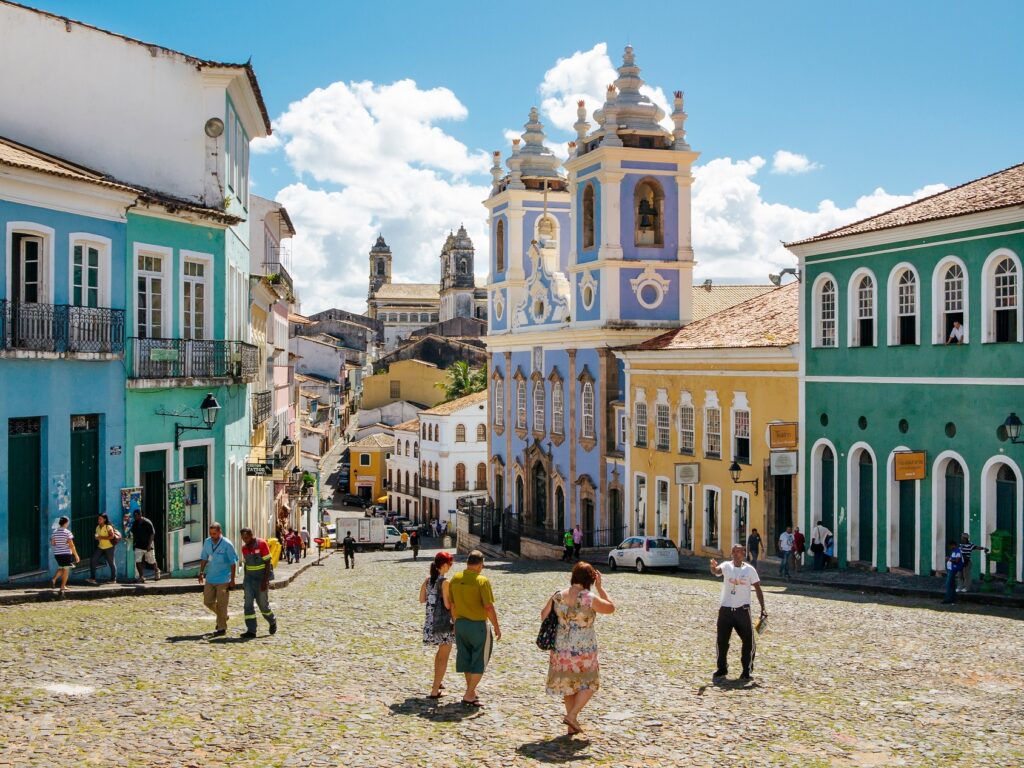 Pelourinho is the heart of Bahia and the centre of African culture in Brazil. The place is full of colourful mansions, churches, shops and restaurants. Handicraft shops are numerous in the region. There are also many hidden squares, where concerts of local music take place and groups with their instruments improvise songs. Cars don’t enter this part of the city and it’s only possible to get around on foot via a network of charming cobblestone streets, making it a unique experience.

The Senhor do Bonfim Church is the most traditional church in Salvador and perhaps the most famous place of worship in Brazil. It was built on Colina Sagrada, from 1745, and is on its stairs where the famous party of Lavagem do Bonfim takes place. Lavagem do Bonfim is an interreligious celebration in which the faithful dress in white and travel in procession for eight kilometres.

Rio is perhaps the best-known Brazilian city, and is renowned for its happy people, pristine beaches, numerous football grounds, and iconic samba dancing. But Rio’s charm goes much deeper. Becoming the colonial capital, a shelter for the Portuguese court, and then the capital of Brazil helped to shape not only the development of the city but also the country at large, in various ways. The city of Rio de Janeiro is the face of Brazil and a great representation of Brazilian culture.

For lovers of history and culture, downtown Rio is the right place to start your tours. In the centre lies the National Library and the Municipal Theatre, two attractions with a guided tour that allow you to dive into the history of the city. The Centro Cultural Banco do Brazil is also in the region and offers a frequently changing program of intriguing exhibitions to explore. In the revitalized port area sits the Olympic Boulevard with its beautiful graffiti murals. Meanwhile, the brand-new Museum of Tomorrow, an intriguing educational and interactive space, joins the MAR — Rio’s Museum of Art — and AquaRio, an oceanarium where you can observe and discover the lives of marine animals. 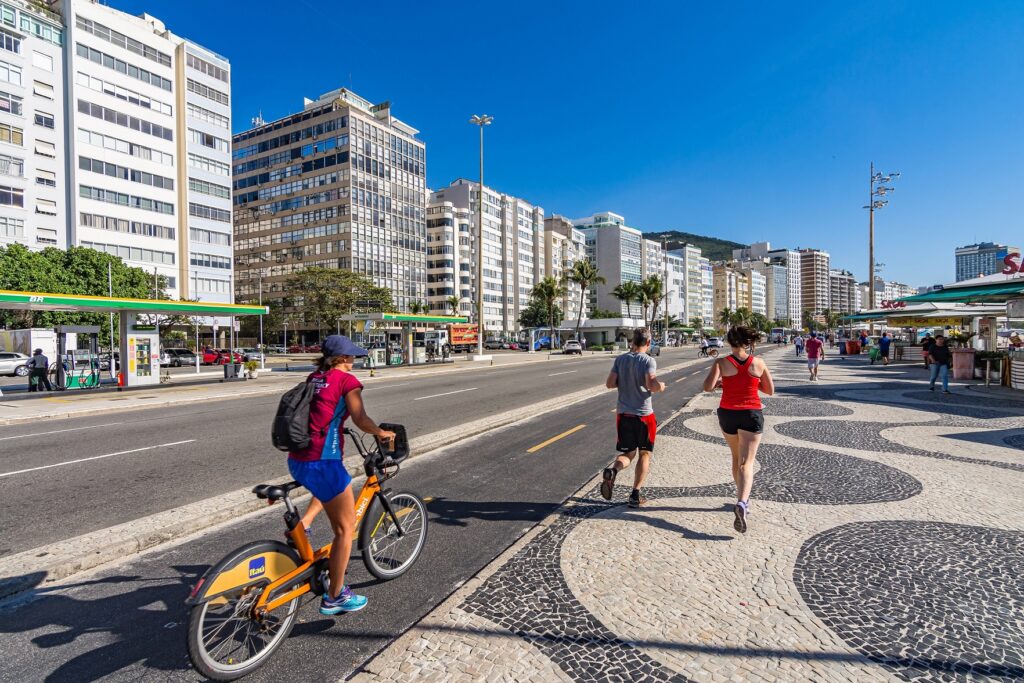 Copacabana is one of the most famous beaches in Brazil and today is one of the postcards of Rio de Janeiro. Often buzzing with energy, the beach reflects a little of what Rio de Janeiro is all about — a high-spirited place awash with unique natural beauty. The boardwalk, made with striking black and white Portuguese stones, is another symbol of the place. Along the beach are several kiosks serving tempting Brazilian food against a backdrop of people playing sports.

What’s more, Lapa is the capital’s bohemian neighbourhood and one of the best places to experience the city’s nightlife. There are several bars and houses playing samba late into the night, while samba de gafieira, a style of ballroom dancing, is also waiting to be found.

Manaus dazzles with the surprises of a unique region. Famous for the biodiversity of the Amazon Forest, the capital of Manaus and its surroundings have much more than fauna and flora to offer. The city centre has a charming feel that still echoes with its colonial past. Discovering the Rio Negro Palace, the Provincial Palace and the incredible Amazonas Theatre with its stunning dome and interior decorations never fail to leave visitors amazed.

The forest has a major influence on the local culture. The Amazon People Cultural Centre offers tours where visitors can interact with different objects used in the daily life of native tribes and Ribeirinhos, the people who live alongside the Amazon River. It’s a great opportunity to discover indigenous malocas and objects for making flour and extracting latex. Inside, the centre contains countless photos, paintings, food items, and necklaces used by indigenous peoples. 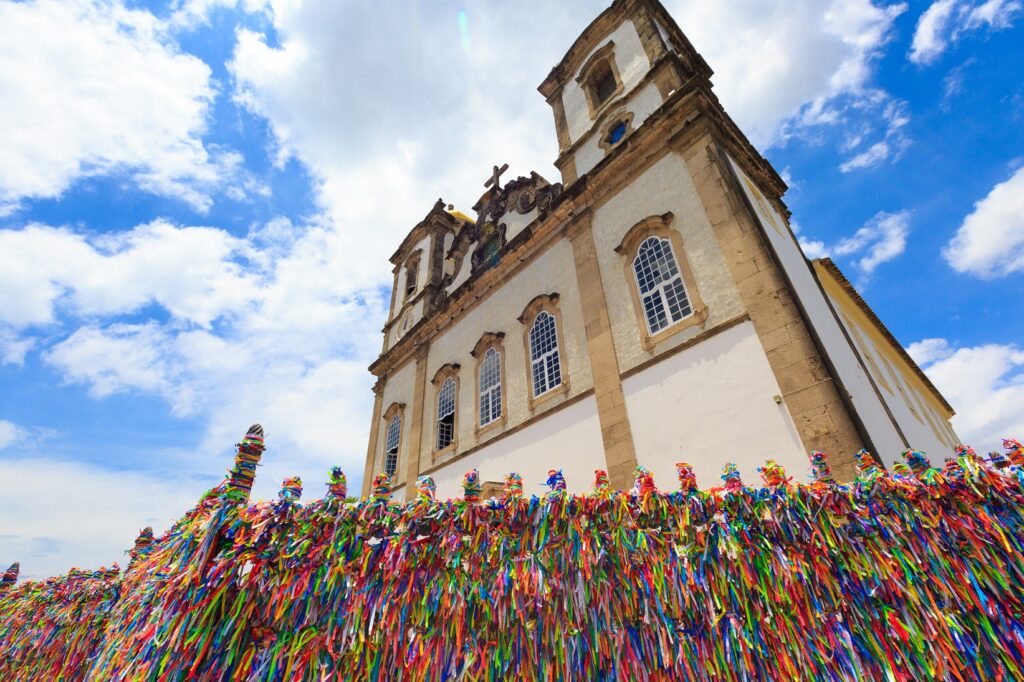 The Amazon Theatre is one of the highlights of Manaus. It is an imposing building both inside and outside and a symbol of the wealth the latex economy has brought to the region. Each salon offers a different detail capable of holding the attention of all types of audiences.

Another must-see in Manaus is the Meeting of Waters. This phenomenon occurs in the Amazon when the muddy waters of the Solimões River meet with the darker waters of the Black River but do not mix. Across a stretch of six kilometres, the two rivers run parallel due to different densities and speeds, creating a fascinating and entirely natural visual spectacle. The phenomenon has a big influence on the architecture of the city, as in São Sebastião Square, in front of the Amazon Theatre, the shapes of the stones represent the meeting of the muddy river with the black water river.

The post Brazil invites the UAE travellers to discover something new appeared first on Travel Daily.