Traditional culture and beach lifestyle meet designer couture as Dior opens its first retail space in Bali, with a partial buyout of Sundara Beach Club at Four Seasons Resort Bali at Jimbaran Bay that reaffirms the island’s profile as a destination for discerning travellers and extraordinary events.

Open daily from June 30 to August 12. 2022, the Dior pop-up store and café at Sundara is the first major event in Bali since borders opened to international visitors in February 2022. It highlights the unique blend of authentic culture and sophisticated lifestyle that make Bali one of the world’s favourite islands.

“The scale and high-profile nature of this event is like nothing Bali has ever seen before,” says Nicolas Senes, Resort Manager at Four Seasons Resort Jimbaran Bay. “Four Seasons and Dior are icons of luxury sophistication, and we are proud to demonstrate the creativity, craftsmanship and world-class experience we offer. This is super exciting for Bali as a destination.”

A dedicated entrance to the pop-up store on Sundara’s Mezzanine level sets the tone for the Dioriviera 2022 Collection’s lush jungle theme, as life-size sculptures of wild animals pop out from tropical foliage. Sundara stripped its Mezzanine level – removing all furniture, interior wall partitions and 16 chandeliers – to provide a blank canvas for Dior’s interior designer to install their own themed furniture, merchandising displays, fitting rooms and a café. Even the walls, ceilings and poolside daybeds have been covered with Dioriviera’s toile de Jouy monochromatic tapestry for the duration of the six-week-long event. 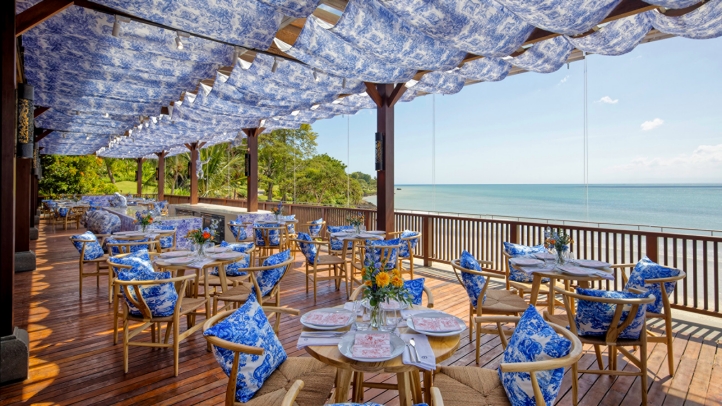 Dior Café provides a culinary experience that taps into Bali’s relaxed yet chic resort style. While Sundara continues to serve its modern international and smoky barbecue flavours at the main dining areas on the ground level, the Dior Café on the Mezzanine welcomes diners for breakfast, lunch and dinner with 180-degree ocean views, and a private bar. Dior’s Mediterranean-inspired menu was created by Four Seasons Executive Pastry Chef David Peduzzi and Sundara Chef de Cuisine David Gavin (former Chef de Cuisine at Mozaic Ubud) who drew on their French training and experience to meet Dior Paris’ culinary guidelines and precise requirements for each dish. The café servers are Sundara staff, styled in Dior uniforms to deliver the five-star service for which Sundara is renowned.

“The scale of this high-end lifestyle event is a first for Bali, resulting from a landmark collaboration between Dior and Four Seasons Jimbaran Bay based on shared goals of delivering excellence in service and attention to detail,” says Mathilde Adam, Senior Director Sales and Marketing at Four Seasons Resorts Bali. “The timing is significant: it is the first major event since Bali opened its borders to the world after more than two years. We are thrilled to be selected as the venue for Dior’s first pop-up store and concept café in Indonesia, reflecting the renewed confidence of the international luxury market as Bali re-emerges with optimism, open arms, and the once-in-a-lifetime experiences that our Resorts offer.”

The Dioriviera pop-up store is open by appointment only for consultations with Dior stylists.