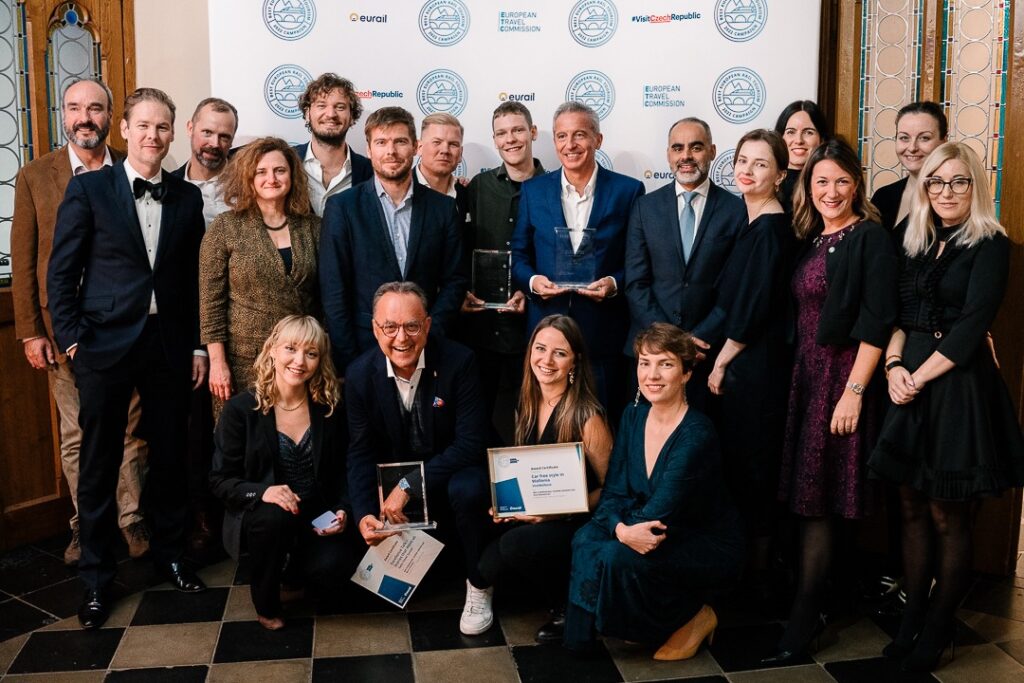 At an award ceremony hosted in Prague by Czech Tourism on 15 November,  the European Travel Commission (ETC) and Eurail B.V. honoured recipients at the second ever Best European Rail Tourism Campaign Awards. The awards recognise the marketing campaigns that best promoted rail travel as a sustainable tourism model. ETC and Eurail received entrees from national and local tourism authorities, rail organisations, marketing agencies and other entities with significant operations in the European tourism sector.

The winners and runners-up were selected by an expert jury comprised of the European Commission and top professionals from the tourism, rail and marketing sectors. During the ceremony, ETC and Eurail B.V. announced that the awards will run again in 2023 after witnessing their growing success over the past two years.

Commenting on the awards, Luís Araújo, ETC’s President, said: “We are currently witnessing a rail revival. Consumers are embracing this more sustainable, and often more affordable, form of travel when choosing to travel in Europe. It is imperative that destinations, tourism boards and businesses capitalise on this growing popularity by joining forces with rail networks to promote new routes through bold and inspiring campaigns which ignite people’s imagination. This year’s entrants did just that. I congratulate them on their creativity and commitment to shining a spotlight on rail as a sustainable travel option.”

Commenting on the awards, Carlo Boselli, General Manager at Eurail B.V., said: “This year has been monumental as we have embraced an incredible resurgence of European rail travel. Alongside the 50th Anniversary of the Interrail Pass, the European Year of Youth has also provided an opportune moment to promote the ever-important relationship between young people and rail, fostering more sustainable modal choices. With the support and cooperation of our carrier members and industry partners, we hope to continuously meet this increasing demand and initiate an extraordinary recovery for rail following a challenging two years. Together, we can reimagine the way we explore the European continent by rail making it more connected and ever more conscious. Congratulations to our winners and we look forward to another successful awards edition in 2023.”

Slovakia Travel takes home Best in Rail Promotion with stunning summer campaign Slovakia Travel, in partnership with the Ministry of Transport and Construction of the Slovak Republic and the national railways (ZSSK), were honoured for their striking ‘So close with Summer trains’ campaign. To increase the number of Slovaks travelling the region, Slovakia Travel ran a campaign centred on introducing Slovaks to lesser-known destinations across the country. Once the campaign had gained traction, they then revealed how citizens could reach these destinations sustainably, comfortably and quickly by rail. As a result of the campaign, Summer 2022 was the most successful summer on record in terms of ticket sales for Slovak trains, even compared to pre-pandemic figures.

Bold Europarunt.se social media campaign awarded as Best in PR
Acting quickly and seizing upon a moment of social media frenzy can be a clever way for brands to make a splash. This is exactly what Sweet Creatives agency did for Sweden’s Europarunt.se during an election campaign when a Sweden Democrat MP caused a stir with a xenophobic tweet, in which he posted a picture of a train covered in his party logo with the caption “Return-migration train. You have a one-way ticket. Next stop Kabul!”.

In response, Europarunt.se published a similar tweet but with an inclusive message that celebrated rail travel as a way of exploring different cultures. The tweet read “Welcome to the Europarunt.se train. You hold an Interrail pass. Next stop, cultural exchange, diversity, and peace! For 50 years, Interrail has stood for unlimited travel in 33 countries and promotes openness, freedom, and tolerance.” The text was accompanied by an image of a train dressed in the advertisement for Interrail’s 50th anniversary. The tweet quickly went viral and generated valuable engagement for the brand, helping to raise awareness of its service. Overall, judges were impressed by Europarunt’s agility, as well as the inclusive sentiment behind the campaign.

The first issue, which was published in June 2022, was dedicated to the Grand Train Tour of Switzerland and looks behind the scenes of Switzerland’s most popular train routes. The second issue published in September, was dedicated to the Lucerne-Interlaken Express. Judges were impressed with Swiss Travel System’s ability to use storytelling to inspire travel agents to influence travellers to choose rail.

VisitWallonia wows judges with innovative travel book series
Belgium tourist board VisitWallonia launched five ‘Car Free Style’ travel books in collaboration with Hike Up and Railtrip.travel – two agencies which specialise in sustainable travel development. Each book highlights a different travel route, providing travellers with an impressive itinerary complete with the train lines, maps, accommodation suggestions and a list of nearby tourist attractions.  Remarkably, the books can be downloaded for free. Judges were impressed by these ambitious guides that promote slow and sustainable travel choices, while making rail travel more accessible.