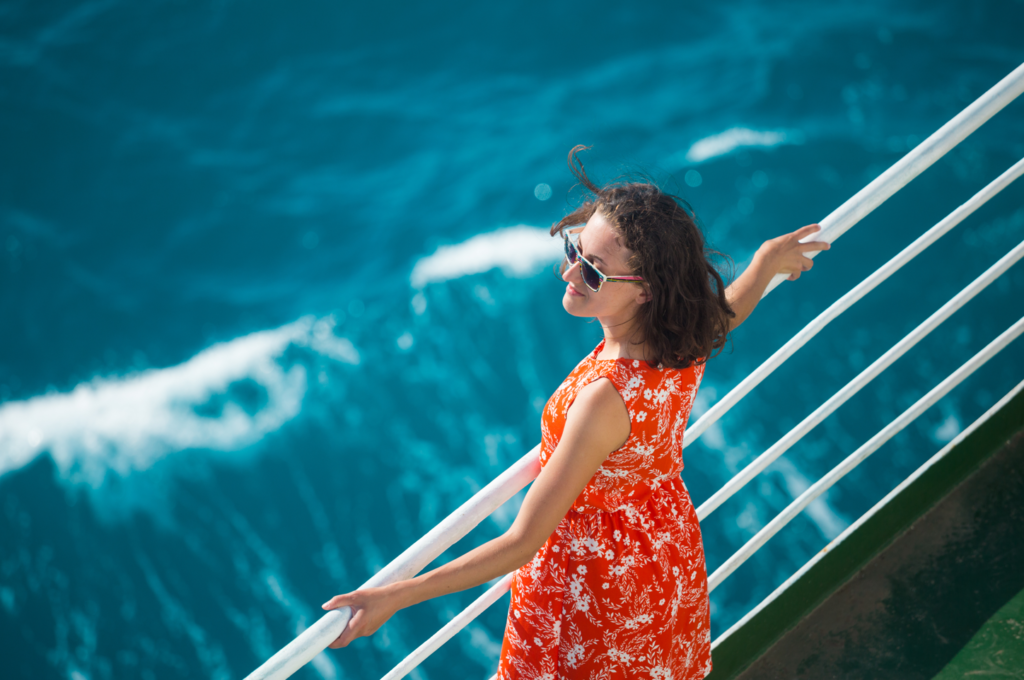 A new report out today reveals a staggering 89% of Brits are interested in travelling by themselves to meet new people, with 66% specifically interested in looking for love while on holiday.Ambassador Cruise Line, the UK’s premium value cruise line, surveyed 2,000 people to gauge shifting perceptions of solo travel and openness to holiday romance across all age groups.

Gordon Nardini, Ambassador Cruise Line spokesperson, says: “We asked how people want to meet others in 2023, what may be holding them back from mingling, and what we can do to encourage holiday romances and friendships. We were surprised to learn how high love is up the solo travel agenda, but also saw a pattern surrounding how low confidence is when it comes to making these connections.”

1) Two shy to try…
The survey revealed that men and women are equally keen to meet new people on holiday but are also equally lacking in confidence to make anything happen. In fact, the data reveals that 48% of both genders feel ‘not at all confident’ to meet potential love interests while away. The least-confident age bracket for meeting potential partners was 25-34, with 57% of younger adults feeling ‘not at all confident’ and no one rating themselves as above 7/10 in confidence.

The 55+ age bracket was the most confident of all age groups, with only 45% citing they are ‘not at all confident’ and 2% rating themselves ‘extremely confident’. People from the East of the UK have the least confidence but are most likely to cruise for love. This suggests that cruising is an appealing option for shy people who want to get out there to meet that special someone

2) Are you lonesome tonight?
When asked if they were put off solo travel for fear of being lonely, the fear factor plummeted with age. More than one in ten (12%) of 18 – 24-year-olds feared loneliness on holiday, compared to only 2% of 45 – 54-year-olds and 3% aged 55+. Interestingly, where you live may affect your confidence when it comes to solo travel – the survey showed people from Scotland and Northern Ireland are the least scared of loneliness while travelling and Scottish people are the most likely to have been on a solo holiday and loved it.

The survey also showed that 15% of men and 21% of women feel that any perceived stigma around solo travel is diminishing and this gives them greater confidence to travel alone.

3) Old flames and new romance
When the premium value cruise line surveyed Brits, along with talking about future love interests, they also specifically asked about past holiday romances, with a quarter (25%) admitting that they have had a romantic fling during a previous holiday. Interestingly, over a fifth (22%) of people who have never married have never had a holiday romance, but this group of people are open to finding love on holiday in the future. The regional variance showed that 40% of people from the East Midlands have never had a holiday romance and are the least interested in finding love on holiday, compared to only 25% from Northern Ireland.

It seems that the Welsh are still dreaming back to their past holiday romances, as people in Wales are the most likely to have met someone special while on holiday in the past and admit to still thinking about that person to this day, according to the survey.

4) Points of difference
Those new to the holiday dating scene may be interested in some helpful pointers to increase their chances of finding love, as the data revealed some big differences between what men and women think is romantic.  Over half of UK adults believe that watching the sunrise or sunset together is the most romantic holiday activity, while men (32%) are more likely to think that kissing is a romantic holiday activity than women (17%).

The older generation prefer traditional showcases of love – holding hands and flirting over dinner all rank highly; however, the appeal of using a hot tub or going for a massage together diminishes with age. A further gender split shows women are more likely to want to attend events that help them meet new people (16%) versus men (11%).

5) Find love at sea in 2023
Gordon Nardini from Ambassador Cruise Line, which offers 167 single cabins across its two ships, says: “A cruise offers a comfortable environment, exciting activities and ample opportunities to meet new people without any awkwardness. The increase in solo travellers on board, a greater willingness to mingle, and better cruise deals for solos help create the perfect conditions for finding love at sea.”

To encourage Brits to shake-off the shyness, Ambassador Cruise Line is offering 11% off single cabins on its future cruises. The offer, which runs for 11 days from Friday 11 November to Monday 21 November, is designed to encourage single travellers to give solo cruising a go in what remains of 2022 and into 2023. With Ambience holding 89 single cabins, and Ambition (launching May 2023) holding 78, there is more than enough space for solo travellers to enjoy a premium value cruise with Ambassador.

To benefit from the offer, guests need to use promo code: SOLO11 on the Ambassador Cruise Line website or during the phone booking process using freephone number 0808 1028701. The offer will apply to Standard Fares, Late Saver Fares and Ambassador Fares.

The post Five pointers to finding love aboard a cruise holiday appeared first on Travel Daily.