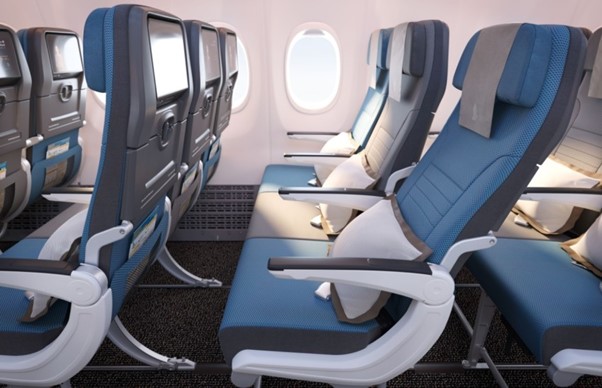 Singapore Airlines has launched new economy and business class cabins, which will be introduced on the airline’s Boeing 737-8 fleet in the coming weeks.

The lie-flat business class seats were created by London-based Factorydesign and built by Thompson Aero Seating for Singapore Airlines.

Collins Aerospace’s latest generation sleek and slimline seats will be used in the economy class cabin.

The aircraft are fitted with Panasonic’s X-Series seat-back in-flight entertainment system, which allows all customers to access the most recent KrisWorld entertainment content.

Panasonic’s in-flight Wi-Fi service and mobile data connectivity services would be included in the aircraft.

Lee Lik Hsin, Singapore Airlines’ Executive Vice President Commercial, said, “A three-year initiative encompassing significant customer research as well as close cooperation with designers and suppliers has resulted in this new product’s release. Now, regardless of the length of their journey, we can provide our customers with a premium travel experience across our entire full-service network. This considerable investment shows Singapore Airlines’ commitment to preserving our position as the world’s leading airline. Despite the recent uptick in air travel demand, our clients can expect the same high-quality products and outstanding service they’ve come to expect from us.”

Singapore Airlines (SIA) is gradually introducing its 737-8 aircraft on short- and medium-haul flights across its network. Subject to regulatory permits, this includes flights to and from Brunei, Cambodia, Indonesia, Malaysia, the Maldives, Nepal, and Thailand.